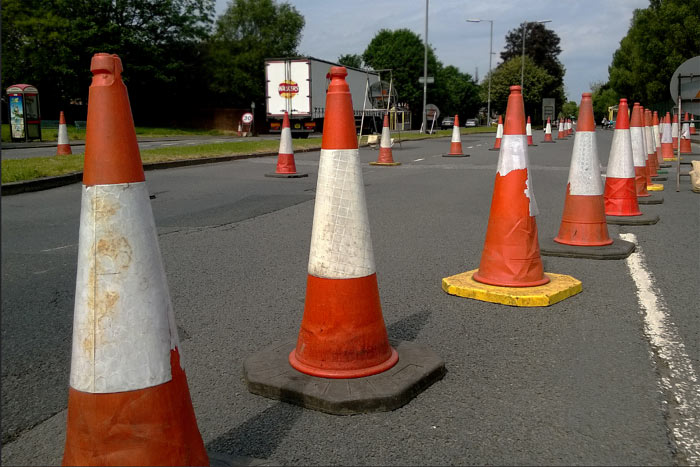 Check CityofKingston.ca/RoadClosures for traffic. Significant City or Utilities Kingston-related traffic disruptions will also be sent out on the City’s Twitter feed @CityofKingston.

* Albert Street – Union to Queen’s Cres. – closed May 17 to 21 for installation of electrical and communications duct banks.
* Colborne Street – Division to Chatham – closed until 7 p.m. July 30 for construction staging.
* Garrett Street – near Division – closed until June 30 for construction staging. Local traffic may access Garrett Street from University Avenue.
* Johnson Street – Napier to Toronto – closed May 17 to July 9 for water and sewer reconstruction by a contractor on behalf of Utilities Kingston.

William to Princess – closed beginning May 17 to allow a contractor on behalf of Utilities Kingston to clean and inspect the sanitary sewer as part of the Trunk Sewer Rehabilitation Project. The side streets listed below will also be impacted with traffic disruptions, lane restrictions and parking space closures from Ontario to King:

* Portsmouth Avenue – Hampstead Heath to Princess and Princess to Howard Cres. – closed to north and southbound traffic until May 31. Detour routes will be in place. This closure is to accommodate sewer installation and improvements.

* Highway 33 – east of Collins Creek Bridge to west of Coronation Boulevard – expect delays due to construction to improve drainage. Construction barrels and flag-people will direct traffic around the work zone. Ontario highway updates are offered by the Ministry of Transportation.

* Jackson Mills Road – near the K&P Trail – reduced to one lane for roadside safety improvements but remains open in both directions.
* John Counter Boulevard – Princess to Indian – expect delays until the summer of 2021 while crews complete work associated with the road-widening project, turtle-fencing and water mains.

* Montreal Street – Joseph to Rideau – one lane will be closed on May 16 from 7 a.m. to 4 p.m. while Utilities Kingston crews install a new gas service.
* Portsmouth Avenue – Glengarry to Princess – expect delays until the end of May as a contractor working on behalf of Utilities Kingston installs a new sanitary sewer and upgrades water mains.

* Grenadier Drive – at Windfield Crescent – expect construction around the Kingston East Community Centre site. The sidewalk on the south side of Grenadier Drive may be restricted weekdays from 7 a.m. to 5 p.m. A flagger will be on-site to direct traffic and assist pedestrians.
* 100 Foot Park pathway – The lower pathway (nearest the waterfront) is now closed as the City readies to repair the lower pedestrian bridge after a regular inspection determined it needs repair. This pathway is closed and signage redirects pedestrians.

* Kingston Mills Road – Daylan to Station (Kingston Mills Swing Bridge) – closed to pedestrians 9 a.m. to 3 p.m. on May 17 to allow for bridge maintenance by Parks Canada. Please direct questions to Allan Smollett of Park Canada Agency/ Government of Canada at 613-283-9735 or allan.smollett@canada.ca.
* Parkway – northerly to Portsmouth and North end to William Hackett Park – closed until Aug. 31 to accommodate construction of the North End Trunk Sewer by a contractor on behalf of Utilities Kingston.

Vehicles, such as larger emergency vehicles and school buses, are no longer permitted on the bridge. Parks Canada advises it has decreased the bridge’s load capacity from 10 tons to 3 tons.