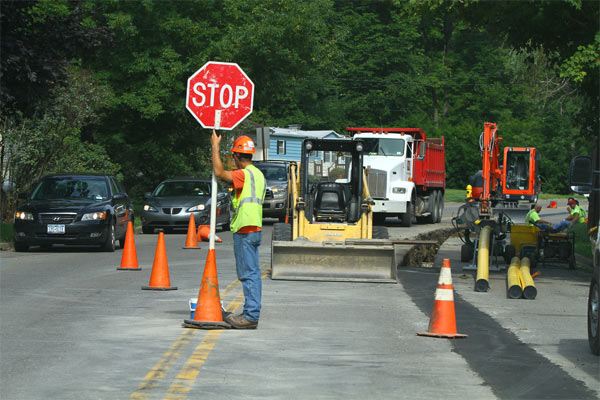 UPDATE: According to the OPP, the Eastbound lanes of HWY 401 between Exit 599 (County Road 6) in Odessa to Exit 611 (Gardiners Road/ Hwy 38) in Kingston will be closed overnight – to remove a trailer of liquid tar that crashed on the highway last week – between Tuesday, August 18 at 6pm until Wednesday, August 19 at 6am.

Traffic and pedestrian impacts this week

As part of the Love Kingston Marketplace project, some vehicle travel lanes and parking spaces downtown have been repurposed to create additional physical-distancing space for pedestrians and for businesses:

* Highway 33 – 240m east of Collins Creek Bridge to 185m west of Coronation Boulevard – expect delays due to construction to improve drainage. Construction barrels and flag-people will direct traffic around the work zone. Ontario highway updates are offered by the Ministry of Transportation.
* Jackson Mills Road – near the K&P Trail – reduced to one lane for roadside safety improvements but remains open in both directions.
* John Counter Boulevard – Princess to Indian – expect delays until the summer of 2021, while crews construct new four-lane road and rail overpass. Use of alternate routes is recommended. Before you cross the rail tracks, please ensure there is space on the opposite side to allow you to fully clear the tracks.
* Kingscourt area – expect local traffic disruptions and minor detours, as a contractor prepares to line sewer mains, on behalf of Utilities Kingston. The lining of the sewers will then extend into the fall. Roadways will be open to traffic. Please follow signage and yield to oncoming traffic as required.

* Kingscourt Avenue – First to Third – expect delays until Aug. 21 as crews pave the road.
* Landsdowne – Pine to Concession – expect delays until Aug. 21 as crews remove asphalt and concrete sidewalk in preparation for new asphalt.
* Ontario Street – Queen to La Salle Causeway – northbound traffic will shift to an existing southbound lane until late 2020 to accommodate repairs to the Fort Frontenac Wall. See details of the traffic control plan.
* Wright Crescent – YMCA southerly to Palace – expect lane closure until Sept. 18 to accommodate installation of a water main on the west/south side of Wright Crescent.

* Grenadier Drive – at Windfield Crescent – expect construction around the Kingston East Community Centre site. The sidewalk on the south side of Grenadier Drive may be restricted weekdays from 7 a.m. to 5 p.m. A flagman will be on-site to direct traffic and assist pedestrians.
* Kingscourt Avenue – First to Third – West sidewalk closed to pedestrian traffic until the end of August to allow a contractor to install water and sewer infrastructure on behalf of Utilities Kingston. Please follow pedestrian detours as signed on site.

Vehicles such as larger emergency vehicles and school buses are no longer permitted to cross this bridge. Parks Canada advises it has decreased the load capacity of this bridge from 10 tons to 3 tons. Built in 1984 to meet code for 10 ton capacity, it does not meet today’s guidelines and structural deterioration due to its age of has further decreased its load capacity. Design work for the Lower Brewers Swing Bridge is underway and it has been designated for replacement in 2021.