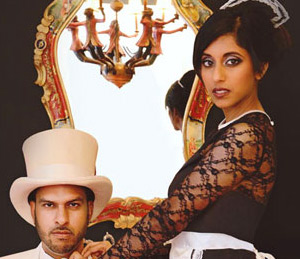 The video (embedded below) – which has already surpassed 140,000 views on Youtube since its release – is described as a “stunning story of deception, betrayal, and liberation with a perfectly matched video and music production that was manifested by exploring the edge of the EDM (Electronic Dance Music) world.”

The singer is paired up with Drega, the Canadian rapper who first made waves in the music scene when he was featured on The Bilz & Kashif’s hit single “O Meri Rani (Spanish Fly)”, which received over 550,000 video views and heavy rotation on Z103 & MuchMusic.

“Stephanie is a real artist,” said Drega. “Her and her team created something really dope that I’m proud to be a part of”.

The video was directed by singer-songwriter Skye Sweetnam and written by Stephanie, Colin Stewart and Skye, who described her as having “a true independent spirit and shows talent that’s outside of the typical pop-dance box”, adding that she is “leading the pack of a new generation of pop artists with conviction. She’s got a lot more to offer than just a pretty face and pretty voice.”

The single – written by Stephanie, Colin Stewart, and Peter Linseman – was produced by MJ Tdot Music Productions, who collectively have had years of experience on the Toronto scene and performed with artists such as Drake, The Weeknd and more.

You can watch the “When We last Kissed feat. Drega” music video below or on Youtube.

Her music is also available on iTunes and you can download the free STEPHANIE B personal mobile app for the iPhone and Android at stephaniebraganza.com .

MUSIC ON UNION presents SOUNDS OF PEACE, a mid-day concert series on…

Downtown Kingston! has released its schedule of films for 2022's "Movies in…

Saturday, February 11 event to be followed by reception