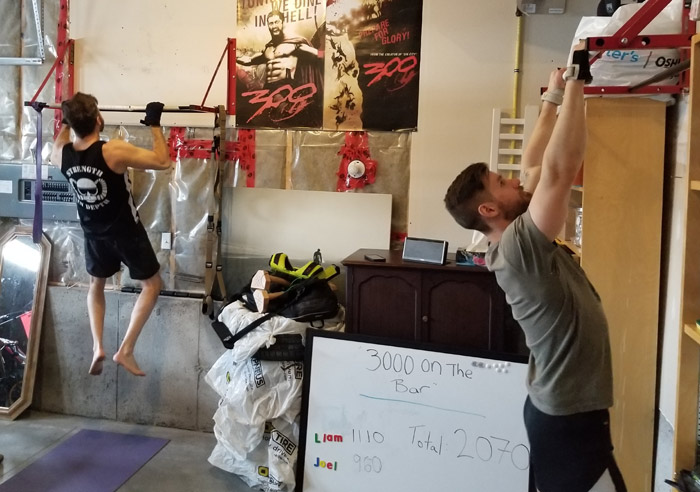 Naval Cadet Joel Charpentier and Officer Cadet Liam Chambers (L-R, above) organized and participated in a pull-up challenge this week with the goal of completing 3,000 pull-ups each within 24 hours.

The Royal Military College of Canada (RMC) cadets engaged in the challenge to raise funds for Soldier On, a Canadian Armed Forces program which contributes to the recovery of its ill and injured members and veterans by providing opportunities and resources through sport, recreational, and creative activities.

Beginning their pull-ups at 8am on Wednesday morning at Charpentier’s garage in Kingston, the cadets completed the final pull-ups at 3:50 AM on Thursday, while also exceeding their original $3000 goal by raising $5,081.

Chambers and Charpentier hope their feat helps raise awareness for Soldier On, which was accomplished in part by live-streaming on Facebook to hundreds of viewers during the challenge.

“I thought we could bring some hope and inspiration to our military team, which I think we accomplished,” Chambers said. “I know how important and how difficult it must be for members who are struggling to not feel alone in these solitary times. This is the backbone or our organization: we are never alone, and we never give up on each other.”

Despite sore hands, arms, and general exhaustion, the two cadets say they’re certain another Soldier On challenge is somewhere on the horizon.

“We always knew we could finish,” Chambers added. “We had the grit to succeed, but it was hard. And there were dark times throughout, which were obvious on the live-stream, but nothing lasts forever, especially if you just continue to march forward.”

“Every dollar we raise is worth it,” he said. “Every CAF member, retired or serving, who is struggling, mentally and physically, is worth it.”

In light of the Stay-at-Home Order, and the continuing challenges of the…

Fires, hurricanes, floods, accidents, and power outages can happen without warning and…