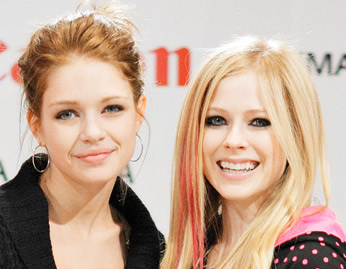 Avril Lavigne has met hundreds of fans over the span of her career, ranging from special needs and hospitalized young fans to visiting children in the Sichuan province of China – victims of the earthquake that struck the area a few months before (where members of the China Association of Social Workers presented her with the Certificate of Honor in recognition of her work with those children)

But it must be a bit of a unique experience for Avril when she has the opportunity to meet fans from the area where she was born and raised.

One such fan, Courtney Hart, has been a fan since Avril first hit the music scene and started her own fan site when she was 13 years old.

Then, a year and half ago, she saw an email in her inbox entitled “Avril’s visiting Toronto, and you’re invited!”.

Cautious at first, contact was soon made with Kristen Zemlak at High Road Communications who sent the email and was involved with Avril’s upcoming press conference as spokesperson for Canon Cameras.

A short time later, Courtney was enroute to the hotel where the Canon press conference was to take place and – after a brief wait in the VIP area – ushered in alone to meet Avril face to face.

Courtney described that first meeting with the star as being a bit of a surreal experience.

“After seeing Avril in music videos and interviews on TV for years, it was a bit strange to walk in and have her looking right at you.” she added with a laugh.

But Courtney credited Avril with putting her at ease right away, and when she mentioned her fan site – and particularly a post where she researched the history of Avril’s “Abbey Dawn” nickname, given to her as a young girl by her father after he saw that name on a sign.

[a related article written by Courtney was also featured in the Kingston Whig Standard newspaper, after she corresponded with the Whig’s Sarah Crosbie – who is now a member of the Morning Krew on K-Rock 1057]

“She told me that I’d found out stuff about where her nickname came from (the Abbey Dawn sanctuary, located just east of Kingston) that even she didn’t know.”

The meeting got even better when the star gifted Courtney with a bag of Canon Camera swag that included one of their new ELPH digital cameras.

“I picked out a pink one,”  Courtney remarked “just like Avril uses in the commercial.” [featured here]

The meeting last 5 or 10 minutes, and the two had a chance to chat about some of Avril’s early hangouts in Napanee, including the skateboard park and  nearby La Pizzeria where Avril became close friends with its owners.

The time spent meeting with Avril for the first time may have been relatively brief, but Courtney described the star as being exceptionally personable and had made it feel like they were just a couple of old friends getting together again for a chat.

And even though fans who have recounted their own meeting with Avril over the years has been universally gushing, the meet-and-greets are likely especially unique when she gets to meet a fan from back home.

“I wrote Kristen Zemlak, who initially invited me to the meeting, how she found me, and she said they searched online for fans who lived in or close to Toronto, where the meeting was to take place”.

Based on that information- and since it is similarly how Calgary fans were located for a small concert Avril held prior to her last tour – Courtney suggested fans:

Courtney initially thought the email offer to meet Avril was either spam or a mass emailing where she could enter a contest to POSSIBLY meet Avril.

It was only after researching the company, the representative who emailed her, and even her IP address, that Courtney believed the offer was a real one.

With Avril Lavigne touring again soon, the chance for fans to meet her have rarely been better.

And following Courtney’s advice – or, if money is no object, buying any available VIP concert tickets that include a meet & greet – give fans their best chance to finally meet their idol.

Courtney Hart is now a contributing writer for the Kingston Herald and will cover news about Avril Lavigne as well as other celebrities associated with Kingston and the surrounding area.

Just in time for Halloween, Crystal Head Vodka has released a new…

Although JUNO winners were announced back on June 29, the Kingston-born singer…

Kingston bands The Glorious Sons and Headstones have both been